BELLS: THEIR HISTORY, SOUNDS AND PERFORMANCE 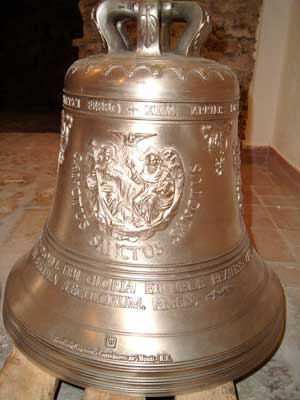 The term derives from the Latin ("bell" - bell) and the greek (- "λογια" logy speech) hence literally "speech on the bells", denotes the set of all disciplines related to the systematic and scientific study of the bells in all points of view (music, sound, artistic, cultural, religious).

The bell is a percussion musical instrument, belonging to the class of idiophones.

In the western world, (introduced in Europe by the Roman Empire from the East), it is usually made of bronze and is used in the Christian world especially to indicate the hour in the church clock towers or as a reminder for functions, special occasions or events affecting the community, and is played by the bell ringers.

The bells are distinguished by their characteristic sound produced by the striking of a clapper on the inner walls of the bell itself. The clapper is generally made of soft iron. In Latin, the bell was called tintinnabulum, indicating the actual sound that it makes. According to researchers, the Italian name for a "bell" derives from the Latin vasa bell, indicating the expression used for hemispherical bronze bowls produced in the area of Naples, the shape of which resembled bells.

Each bell placed in a tower is dedicated to one or more saints and bears ornaments and themed decorations. You can often find on the bell, inscriptions in Latin or in the language of the country where the bell is cast, regarding the year of the casting, the name of the founder and those who have contributed to the molten bell metal by voluntary donations.

The bells: a mysterious mixture of bronze and the heavens, for celebrations and for mourning, of time and eternity. The landscape is dotted with thousands of Christian steeples that "mark the boundary between the earth and the sky" (F. De André). The chimes of "sacred bronzes" for centuries have been the special sound to people's lives and communities.

The "bell" organology model is common in many cultures, from prehistoric times. However, it seems that the most ancient bells, as seen by the Western world today, date back to several thousand years before Christ in China.

The ancient Greeks used to hang some bells inside of their shields so that they would tinkle in honour of the gods.

According to a legend, the bell with an internal clapper was an Italian invention: it was introduced by Bishop Paulinus of Nola in the fifth century although there is no document attesting to the authenticity of the invention to the saint. However, only in the eighth-ninth century churches and parish churches began to have bells and the first bell towers were built which became more and more widespread after year one thousand. Over time, the art of bell casting and the difference of sounds created from one country to another was perfectioned in order to attain a correlation between bells and populations which still exists today.

«The church bells remind us not to forget that Sunday is the Lord's day; they represent the" voice of God "for those who believe and are a message for those who do not believe. It's so beautiful to hear the sound of the bells that sing the glory of the Lord by all creatures. The sound of bell strikes by thousands of church towers in the world is like a heavenly liturgy which cannot just be identified in marking just the hour strikes, but in offering the time of the sacredness and consecrate it to Christ, the Lord of all time. Each of us bears a very sensitive bell. This bell is called the heart. This heart plays a sound and I hope that your heart will always play beautiful melodies »
(Saint John Paul II)

The size, the sound and the note 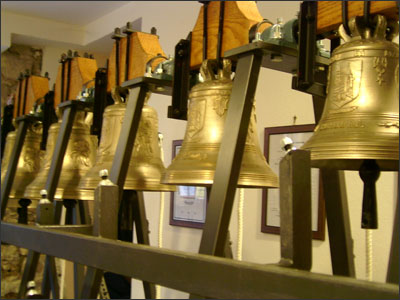 The sound of a bell is closely related to a complex balance of thicknesses that determine the profile of the bell. The thicknesses form, along with the fundamental note and partial to the sound of the bell. The strike note, however, is determined by the volume of the bell: the bigger the bell, the deeper the note will be; the smaller the bell, the sharper the note will be. There are different types of bells depending on the thickness, the pitch and the shape. The profile, which is called the "mantle" can be different (for example) depending on the needs of the place where the new bell is to be installed and according to the different historical periods. There are "light mantles " and "heavy mantles” used by the various foundries.

The heavier weighted bell and therefore the thickest, allows a greater and prolonged vibration of the bell sound as well as greater support of the partial tones, especially those of lower octave and major third, which must be present in each bell. Generally speaking, the heaviest bell in proportion appears to have an overall warmer and more pleasant sound, while a "light" bell is sometimes strident and unpleasant to the ear.

A good bell can reach up to 50 partial tones, but the most important and above all the most recognizable are (compared to the fundamental note): part of the "First", of the "Third" (which can be either higher or lower), "Fifth" (which may be decreased), "Upper Octave" and "Lower Octave".

Here is a list of the main signals related to the religious and civil life, which can vary from different areas:

The introduction of the custom to ring the bells in the canonical hours, and during the celebration of the Eucharist is attributed to Pope Sabiniano (604-606).

In ancient times, bells were also used to call:

In rural civilization bells have always had the task of playing to announce the arrival of large storms or hail, hoping to scaring them away in order to save the crops. In the many prayers written on the bells you can often find these words : "a fulgure studded et libera nos Domine" (deliver us, O Lord, from lightning and storms) or "recedat Procellarum spiritus" (spirit of storms move away) or "Defunctos ploro, nimbos Fugo, festaque honoro "(I cry for the dead, flee storms and honor festivities). In some towns of northern Italy,the use of one or more bells to ring to ward off hail from crops is still used.

The texts in the paragraph regarding campanology have been freely taken from Wikipedia.
The photos, unless otherwise indicated, have been downloaded from the internet using the Google Images search engine or belong to Belltron.